Blog - Latest News
You are here: Home / News / The choice of Stainless steel material for brewery

Chloride cracking may occur in thin-walled tubes and vessels due to their susceptibility to tensile stress. If the vessel leaks, it is often due to substandard welding quality or high fatigue load. CIP (field cleaning) does not corrode stainless steel, but under extreme conditions may cause chloride cracking on stainless steel with a high degree of cold forming. Fatigue corrosion and stress corrosion cracking failure mechanisms are similar. An example of fatigue corrosion in a saccharifying tank is the opening of a grain bin. After mashing and heating, the grains are separated from the wort and discharged through the opening of the grain barn. The impact and high load from the discharged grain produce fatigue corrosion cracks along the weld edge in the area directly opposite the mouth of the warehouse. The leakage in some places is due to poor quality. The wort container may crack from the outside to the inside due to chloride cracking and heat fatigue. If there is a high welding internal stress during steam-heated spiral pipe welding, cracking may occur throughout the stainless steel vessel wall. 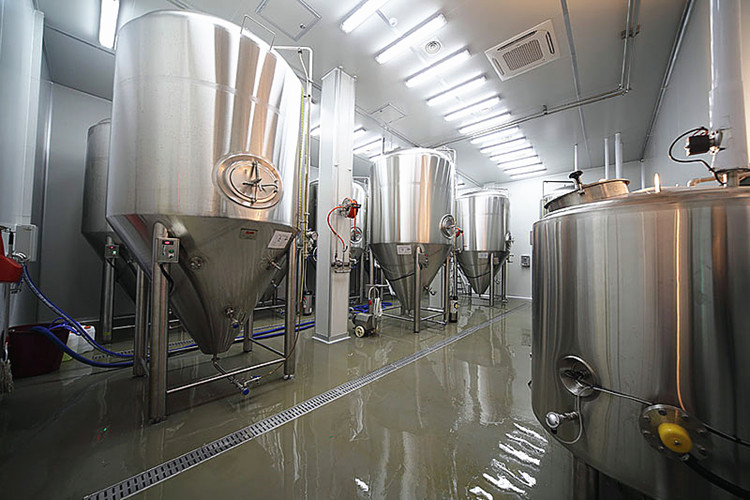 AISI 304 or 316 stainless steel has a carbon content of < 0.08% and can be sensitized if exposed to 500 ~ 800 ℃ for a given period of time, which may occur during welding. Therefore, welding causes sensitization of the “heat-affected zone” along the weld.

Sensitization will lead to the formation of chromium carbide at grain boundaries, resulting in poor chromium at grain boundaries, easy to cause intergranular corrosion of stainless steel in the case of thick tube wall (BBB 0 2 ~ 3mm). In order to avoid this situation, often choose “weldable steel”: such as L-grade steel, such as 304L, 316L, which carbon content is less than 0.03%; Titanium stabilized steel: 321,316 Ti.

For the corrosion resistance of stainless steel, the weld quality and heat affected zone, surface roughness and the condition of the protective oxide layer are important. The surface condition of stainless steel is particularly important for the food and beverage industry and pharmaceutical industry. Corrosion problems in breweries are often caused by uneven surface conditions. During fabrication (welding, heat treatment, grinding, etc.), the passivated chromium oxide layer is damaged, thus reducing the corrosion resistance. Insufficient protective gas used in stainless steel welding will lead to the formation of a hot tempering color. These porous thermal tempering colors are composed of various oxides that tend to absorb ions such as chloride ions, reducing corrosion resistance and failing to protect the base metal.

If thermals or other types of contaminants are unacceptable, some kind of metal finish must be used to address them. Pickling or passivation can remove the old oxide layer, heat back color and other contaminants, thus allowing the passivated chromium oxide film to completely recover. The most common pickling process is to immerse stainless steel tubes in a mixed acid solution of nitric acid and hydrofluoric acid, which can also be accomplished by a spray or piping rinse system. Although the surface of the stainless steel is active after pickling, a passivation film can be formed within 24 hours due to the reaction of chromium with oxygen in the air, but in some cases, passivation is chemically facilitated by the use of nitric acid.

Welds and heat-affected zones are often the cause of corrosion. For breweries and other food industries, defects in welds, such as lack of penetration, are of Paramount importance, causing hygiene and sterilization problems. Engineers and buyers often identify inappropriate welding conditions and welding procedures that cannot be performed correctly. The result is poor quality welds and surface conditions in the construction that must be completed.

Thermal reheating is caused by light being absorbed into a transparent oxide layer, due to the different thicknesses of the oxide layer. Because the colors have different refraction coefficients, the blue-looking oxide layer can only reflect blue light and absorb other light. Thicker oxide layers have more holes than fully transparent thin oxide layers, therefore, thicker oxide layers will reduce the corrosion resistance and non-adhesion of stainless steel. For most standards, a light straw color of heat back is acceptable; All other heat-back colors such as red and blue are unacceptable. The pharmaceutical industry does not allow hot tempering.

The geometry of the weld shall be as regular as possible. Qualified welds will not damage the metal surface of the substrate. Corrosion often begins inside a tiny pinhole at the beginning/end of a weld.

Theoretically, there are no tiny pinholes, looseness, or other bumps at the start/end. Good weld penetration is very important. Piping must be well symmetrical and the width of the weld shall be fixed.

Surface roughness affects the hygiene and corrosion properties of stainless steel. The corrosion resistance of the electropolished surface is the best, followed by the mechanically polished surface. In general, the beer industry and the food industry do not force the use of electropolished surfaces, however such surfaces, thus achieving excellent sanitary conditions and easy cleaning. Most pipes are bright annealed during manufacturing. Because the bright annealing process greatly improves the quality, pickling inside such pipes is often not performed unless the material surface has a severe heat back color or is contaminated with iron. Stainless steel sheet often has 2B surface, they have good surface performance. In breweries, thin-walled, straight-welded stainless steel pipes are most commonly used, with 2B finishes and sometimes another finish (brush or polish) on the exterior. Stainless steel extruded tubes are not commonly used in breweries; they are used for high-pressure purposes.

Want to join the discussion?
Feel free to contribute!

The choice of Stainless steel material for food and beverage industrial